Today’s theme is STUFF!  And the fact that many of us have too much of it.  These three books will likely invite many connections from some of our students and all three have the same important message about what is most valuable. 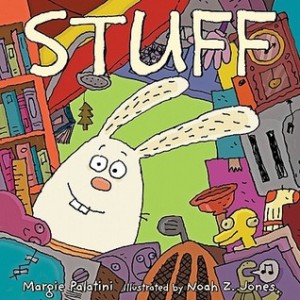 Stuff,  by Margie Palatini, is about a bunny named Edward.  Edward has far too much STUFF.  His house is full and his friends no longer want to come over because Edward is more interested in his stuff than them.  Eventually, his friends come to his rescue and help him sort, organize, donate and encourage him to keep only the STUFF that is important.  This book is humorous but the message it shares would stimulate some good discussions about materialism and what is most valuable.

Too Many Toys by David Shannon tells a similar tale.  I made a lot of connections to this book!  (character’s name is  Spencer -my son’s name – and stepping barefoot on Lego pieces!)  Spencer’s mom eventually gives him a box to fill with toys to “give away”.  Easier said than done!  Spencer is faced with the challenge of choices – which toys are most important to him?  I am a huge David Shannon fan – he always manages to capture moments that so many of us can connect to and his illustrations are hilarious.  Another great book to share with the message that more toys does not make more fun!

More – by I.C. Springman takes a more of sophisticated look at materialism that I recommend for grades 3 and up.  Through stunning illustrations and very little text, this book invites the question – when is MORE more than enough?  Magpie’s collection, that starts with one marble, gets out of hand as he begins filling his nest with more and more bits and pieces.  Eventually the weight of all his stuff results in the tree collapsing.  His mice friends try to help him realize that he simply has more than he needs.    In this material world we live in, where many children want more and more “shiny stuff”, it is a good reminder of when it is time to say “enough”.  This book  has very few words but a strong message – a perfect combination for practicing “INFERING”!